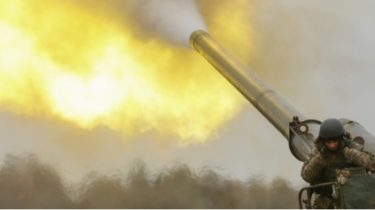 Over the past day the militants of 34 times opened fire on positions of Ukrainian defenders. This is stated in the summary of the press center of staff ATO as at 6.00.

So, in the direction of Mariupol, there were 24 cases of violations of “silence mode”. High calibre machineguns, grenade launchers, small arms, the militants involved in the areas of Stroganovka, Lebedinsky and Pavlopol, and in the Water, Krasnogorovka, Gnutova and Taramchuk shelling continued with mortars of 82mm caliber. The fortifications of the Ukrainian Armed Forces in Shirokino, the enemy opened fire from mortars caliber 120mm and Marinka except mortars, were involved in enemy snipers, machine guns, grenade launchers, small arms.

Also on the Lugansk direction were 5 provocations against ATO forces. In the direction of Stanytsia Luhanska and Novoaleksandrovka occupants opened fire from grenade launchers and small arms, and the positions near Boguslav – from cannon artillery 122mm.

In addition, at the direction of Donetsk, the shelling continues in the town. During this period the fighters 5 times used a variety of weapons, including mortars both calibers, grenades of different systems and machine guns.

We will remind, the special monitoring mission of the OSCE reported limited access to breeding areas forces in the Donbas on October 25.