Obama will meet with Merkel to discuss Ukraine and Syria 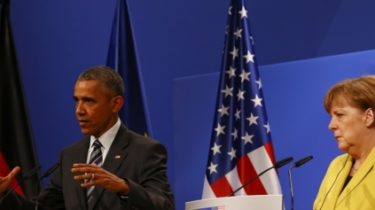 Obama will meet with Merkel to discuss Ukraine and Syria

The American President in November to visit Germany.

US President Barack Obama on November 17-18 will visit Germany to meet with Chancellor Angela Merkel.

It is noted that Obama and Merkel, among others, will discuss joint efforts of the U.S. and Germany regarding the solution of conflicts in Ukraine and Syria, a campaign to eliminate and destroy ISIS, and transatlantic economic relations.

This visit to Germany for Obama will be the sixth time of his presidency.

We will remind, on October 19 in Berlin, a meeting of leaders of the countries-participants of the Normandy format between Ukraine, France, Germany and Russia. At the end of four hours of talks, the parties decided to develop a road map for implementation of the Minsk agreements, to extend the OSCE mission in Donbass and identify four new areas for cultivation of the parties to the conflict in Eastern Ukraine.