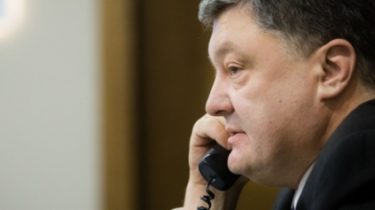 The President of Ukraine told about the results of the meeting “channel four”.

The President of Ukraine Petro Poroshenko held a telephone conversation with Vice-the U.S. President Joseph Biden, during which he spoke about the results of the meeting “channel four” in Berlin.

During a conversation policy stressed the importance of continuing the policy of active involvement of the United States to promote the implementation of the Minsk agreements and restoring the territorial integrity of Ukraine.

Poroshenko called for the strengthening of transatlantic unity for the sake of sanctions against Russia in connection with the continuing aggression in the Donbas and the occupation of the Crimea. The two sides also discussed the progress of Ukrainian reforms and the continuation of their support of the USA.

See also: Official Washington supports the “Norman format”, but does not comment on talks in Berlin

We will remind, on October 19 in Berlin, a meeting of leaders of the countries-participants of the Normandy format between Ukraine, France, Germany and Russia. At the end of four hours of talks, the parties decided to develop a road map for implementation of the Minsk agreements, to extend the OSCE mission in Donbass and identify four new areas for cultivation of the parties to the conflict in Eastern Ukraine.