The government approved further changes to the Tax code 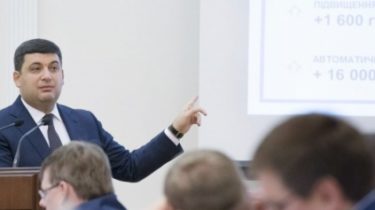 The government approved further changes to the Tax code

Novation is committed to fight corruption through changes in tax administration.

Today, October 26, the government adopted a draft law which envisages amendments to the Tax code of Ukraine. The main innovations should contribute to the implementation of sound anti-corruption policy in tax administration.

“Most importantly, we will put a very serious barriers where previously funds could be leached from the state budget and transferred in cash through the conversion centers. That is, the Code, these changes provide an opportunity to implement a full-fledged anti-corruption policy relative to tax administration in the country”, – assured the Prime Minister Vladimir Groisman, was quoted by the press service of the Cabinet.

See also: Businesses can not “breed” in captivity.

The changes proposed by the government yesterday reviewed during a meeting of the National Council of reforms under the chairmanship of the President of Ukraine Petro Poroshenko.

Recall that the tax changes during the current government, discussed the past four months.

The bill still needs to support the Verkhovna Rada.

The government also promises to re-submit the revised draft budget for 2017, where he will provide for raising the minimum wage in two times – up to 3,2 thousand UAH.