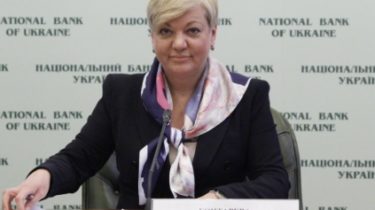 This is the first tranche to the state budget of 38 billion UAH.

The national Bank of Ukraine transferred the first tranche of the profit for the year 2016 in the state budget. It is about UAH 10 billion from more than 38 billion provided for this year.

About it in interview “to Gromadsky” said the Chairman of the National Bank Valeria Gontareva.

“The whole amount will be transferred in several tranches as agreed with the Finance Ministry that it had no impact on price stability in the country”, — said Gontareva.

According to her, early prevented something that has not been formed the Board of the national Bank.

It is noted that yesterday, October 25, he was fully formed. The members of the Board elected Chairman, Bohdan Danylyshyn (Minister of the economy in 2007-2010).

Council members approved the annual consolidated financial statements of the Central Bank in 2015 and allocation of Central Bank profits.

We will remind, the national Bank addressed to the Chairman of the Verkhovna Rada Andrew Parubiy open letter offering to replace the head of Committee of Parliament on financial policy and banking Serhiy Rybalka. The regulator also has questions for the Committee.