Poroshenko told the date the rapid growth of wages in Ukraine 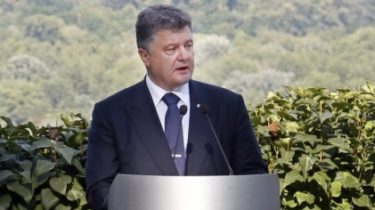 Poroshenko told the date the rapid growth of wages in Ukraine

The state minimum rate will increase from 1 January next year.

President Petro Poroshenko announced increasing the minimum wage from 1 January 2017. Incomes of Ukrainians must rise without any new tax burdens for citizens, says the story TSN.19:30.

The decision Poroshenko called the fight against poverty, which the government is, despite the hardships of wartime. “This decision affects more than 4 million employed Ukrainians, the level of payment which currently is 1450 UAH. For payments in the public sector will be found related resources of the state budget. As for the private sector, it is a clear rule that forbids Ukrainians to pay less than 3200 UAH per month”, – said the head of state.

According to the presidential press service, the decision Poroshenko was taken after consultations with Prime Minister Vladimir Groisman. “With the development of the Armed Forces of Ukraine the first priority of the authorities, as soon as this opportunity becomes a struggle with poverty. And the aggression of the Russian Federation against our country is not an excuse to delay reforms, which we do in war,” – said the Ukrainian leader. Condition that he has established the lack of growth in tax pressure on small and medium business. This position on Bank is total for the head of state, government and factions of the majority in Parliament.

Petro Poroshenko announced the date of the wage increase

The President assured that from January 1, 2017, the salary will increase, however, with no new tax burdens for citizens. The decision itself was called the struggle against poverty waged despite the hardships of wartime.