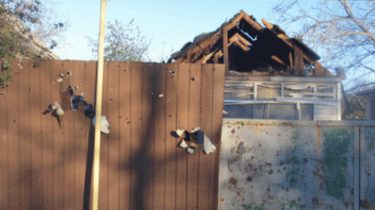 From attacks of militants were injured civilian houses.

One Ukrainian soldier and two civilians, including a teenager, were wounded in the Donbas during the day. Fire on positions of AFU fighters opened more than 30 times, according to a story TSN.19:30.

In the Luhansk region near Boguslav, Ukrainian advanced locomotive fired from artillery. In Popasnaya from enemy shells hit 8 residential buildings. There is a fragment wounded a 15-year-old boy.

In the sector of Donetsk under fire was once again Avdiivka and its surroundings. Near the crossing point of the Maori by an exploding shell injured one civilian man who came from the occupied Horlivka. Along the entire front line in the sector of “Mariupol” of the day did not fall silent enemy rocket-propelled grenades, small arms and mortars.

During enemy shelling Popasna 15-year-old was wounded. In Luhansk, near Boguslav, shelled our defenses with artillery, and in Popasnaya fired at the city, damaged several buildings and injured a 15 year old teenager. In the sector of Donetsk, Avdiivka getting the direction from prohibited 120-x and 82-x mortars.