Provocations in Luhansk direction and the attacks on Mariupol. Digest ATO 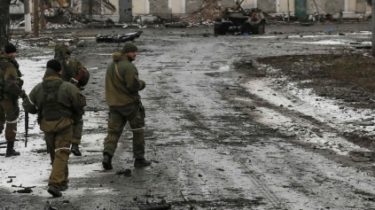 Provocations in Luhansk direction and the attacks on Mariupol. Digest ATO

During the day in the area of counter-terrorism operations by the Russian occupation forces recorded 28 cases of opening fire on positions of Armed forces of Ukraine.

On the Mariupol direction was held on 19 attacks. In the area of Shirokino, Talakovki the enemy was firing from machine guns, grenade launchers and small arms. Near Krasnogorovka and Water attacks forces ATO continued from mortars of 82mm and 120mm caliber, and the fire of enemy snipers spotted in the area of Marinka and Starognatovki.

On the Lugansk direction were 4 armed provocations. In the direction of the Crimean, Gold, Novozvanovka and Tryokhizbenka against Ukrainian forces, the militants used grenade launchers, machine guns, large caliber, small arms.

See also: In Minsk will raise the issue of withdrawal of forces, several times disrupted militants

We will remind, the special monitoring mission of the OSCE reported limited access to breeding areas forces in the Donbas on October 25.

The fire on our positions, the militants opened three dozen times, in the Luhansk region, near Boguslav, shelled our defenses with artillery, and in Popasnaya fired at the city, damaged several buildings and injured a 15 year old teenager. In the sector of Donetsk, Avdiivka getting the direction from prohibited 120’s and eighty-two mortars.