“Do not believe? Will come to me.” Poroshenko assured that the minimum salary will increase to 3200 UAH 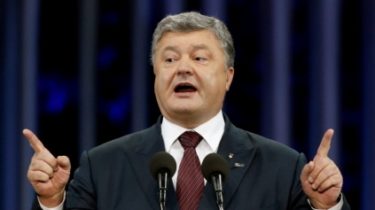 “Do not believe? Will come to me.” Poroshenko assured that the minimum salary will increase to 3200 UAH

At the same time, cash assistance to the unemployed will remain at the level of 1450 hryvnia.

“Yesterday, the Cabinet announced the decision that from 1 January 2017, twice will increase wages,” he said in Zhitomir, adding that the government has “untied” the minimum wage from a living wage.

See also: Rozenko told how raising the minimum wage will affect the subsidies

“Salary should not be less than minimum wage, but nobody denies that it was much more than that. What is it, when we have expenditures on the unemployed equal pay? What fool would go to work, if you can sign up for unemployment benefits to do nothing and get the same salary in 1400 hryvnia?”, – said the head of state.

Poroshenko also assured that the cash assistance to the unemployed will remain at the level of 1450 hryvnia.

“But if a person works a full working week full time, will earn the 3200 and there is a difference! Don’t believe? I’m telling you. Will come to me…” – said Poroshenko person in the room who was sitting opposite him.

“When a previously raised wages? To remind you? It was near here, in Berdychiv, in 2004-m to year, two months before the election. And we decided to increase”, – said the head of state.

Poroshenko said that the main beneficiary of this decision will get $ 4 million Ukrainians who are currently working and have a salary less than 1.5 thousand UAH.

Next year will increase the minimum wage and a living wage

Minimum wage and living wage in Ukraine will increase up to 3200 UAH – said the Prime Minister Volodymyr Groysman. Amendments to the draft Budget for 2017 before its second reading. Now in the Cabinet think how much money the announced increase of the minimal wage. The minimum wage in Ukraine today is 1450 UAH, and from the first of December is expected to increase to 1600 UAH.

Recall, Poroshenko has announced an increase in the minimum wage from 1 January 2017. Earlier, the Prime Minister Vladimir Groisman made a sensational statement about raising the minimum wage in Ukraine up to 3200 UAH.