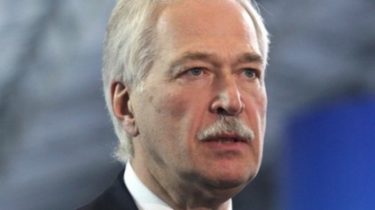 Russia after leaving Gryzlov, the negotiations will continue to represent the special representative of the Russian Federation.

Plenipotentiary representative of Russia in the Trilateral contact group on Ukraine, Boris Gryzlov prematurely left the talks in Minsk.

Gryzlov silently walked past the journalists to leave. But the trilateral contact group then continued to work. According to the source, Russia after leaving Gryzlov at the talks will continue to present Russian special representative – Ambassador at large Ministry of foreign Affairs of the Russian Federation Azamat kulmuhametov.

Gryzlov after a meeting said that after the creation of security zones in the Donbas in these areas can be entered, the police, the OSCE mission in service weapon.

Read also: Poroshenko with Biden discussed the possibility of bringing the United States to the Minsk process

“Now the process of withdrawal of the parties in a previously agreed points. After implementing these solutions it is possible to introduce in the place of breeding of the parties to the police of the OSCE mission, armed with a service weapon, unless, of course, such activities will be ready this international organization,” he said.

We will remind that earlier it was mentioned that in Minsk will raise the issue of withdrawal of forces, several times disrupted the militants. Traditionally the meeting is held in “President-Hotel” behind closed doors. The agenda of the talks is unknown, assume that it is likely to rely on the recent meeting in the “Normandy format”.