Over the past day in the shelling killed one soldier, the defense Ministry 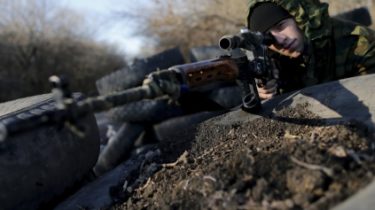 Over the past day in the shelling killed one soldier, the defense Ministry

In total, more than 70 militants violated the silence regime.

Over the past day in the area ATO killed one Ukrainian soldier, three more were injured.

About it today, 27 October, said the speaker of the Ministry of defence on ATO Col.

“Over the past day due to the fighting killed one soldier. Three more of our men were wounded,” – said the Colonel.

According to him, for the first time since the withdrawal of forces and means in the three districts in the Donbass were fired at the town of Golden Popasnjanska district.

“Occupancy violated the silence regime in Gold, for the first time since the withdrawal of forces and means of the Ukrainian army and the Russian occupation troops. Major combat operations, as in past weeks, was conducted in the Popasnyansky area. In particular in Novozvanivka, Novooleksandrivka and the Trinity,” – said the speaker.

He also added that the Ukrainian troops were forced to open fire in response.

“Just a day, in the direction of Lugansk took place on 15 enemy attacks, in particular one of the heavy weapons. The direction of Donetsk – the main hot spot is the industrial area of Avdiivka. During the day, occupancy who have deployed forces and heavy weaponry in Yasinovataya repeatedly shelled Ukrainian positions with mortars”, – stated in the message.

Also, Motuzyanik told about the sudden death of the Colonel of the Ukrainian Ministry of defense.

“Yesterday, in Kiev, on the way to work died Colonel Valentin Fedichev, officer of the chief Inspectorate of the Ministry of defense of Ukraine. He comes from the front of the Village, Luhansk,” – said the speaker.