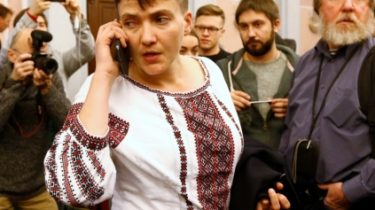 For such actions, disappears the feeling of the war between Russia and Ukraine.

The consequences of the arrival of Ukrainian MP Nadiya Savchenko harmful to Ukrainian political prisoners.

“Russian PR campaign for the arrival of Hope Savchenko in Moscow creates the illusion that any Ukrainian can fearlessly come to Russia, everything is quiet. But it’s not true! While I understand that she is naive Nadezhda genuinely wanted to help someone. However, the resulting background information is hurting in the Affairs of other Ukrainian political prisoners,” – said Feigin.

Also, according to counsel, for such actions, disappears the feeling of Russia’s war with Ukraine, it creates the appearance that the atmosphere is tense, but not so hostile.

“Person “will”, and we have more work – another one to pull out of a Russian prison”, – concluded the lawyer.

Recall that on October 26 the people’s Deputy of Ukraine, former political prisoner Nadia Savchenko unexpectedly arrived in Moscow for consideration in the Supreme court of appeal against the sentence of the Ukrainian political prisoner Mykola Karpyuk and Stanislav Klychu.

See photos: the Embroidery and national slogans in court: how to Savchenko for the first time after the liberation visited Moscow

Ukrainians were sentenced to 20 and 22.5 years of imprisonment in a strict regime colony for participation in the Chechen war. To support the prisoners arrived in Moscow Nadezhda Savchenko. After nearly two years in prison this is her first visit to Russia.