In the Kiev subway found the drone 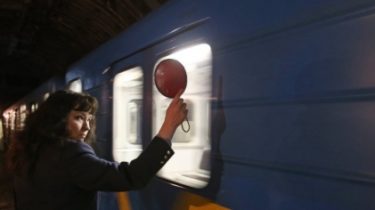 In the Kiev subway found the drone

Quadcopter toy waiting for its owner in the lost and found.

In the Kiev subway for the second month looking for the owner of a toy drone. The lost and found for children’s things is very important, because for kids loss of a favorite toy is usually a tragedy, says the story TSN.19:30.

At the station “Nivki” for lost items allocated a small closet. Usually there are the most common loss – umbrellas, gloves and the like. Peak human carelessness accounts for the new year holidays. Then, after corporate events and parties are massively losing bags, backpacks, purses, laptops, phones. Working in the lost and found of the subway in good faith. Svetlana came over the student of his daughter. The inside was even 70 hryvnias. Them too returned. “And the money was returned as not strange. So, is good,” she says. Senior storekeeper Bureau Tamara Kolch explains that the money for nine years had seen. “The police found at the station “Shulyavka” more than 100 thousand”, – she told. Most storekeeper worried about the lost baby clothes and toys. “It’s for the baby, I know tragedy,” the woman said.

In balls and bags new arrivals at lost and found. Lost things season is in full swing. Peak human carelessness – after corporate events and Christmas parties. However, most of the storekeeper worried about lost children’s clothes and toys. A few months ago, lost and found, brought a toy quadcopter.

A few months ago, lost and found, brought a toy quadcopter. Its journalists do not show to not give it to a stranger. “If the owner appears, he should say what he is, what color. People must fully describe,” explains Tamara.

In the beginning of the year the social network has stirred up the news about the lost collection of little monsters and machines. The month indifferent Kiev disseminated information from the Kiev metro and the owner is finally found. Then 5-year-old Bear looked pleased. The same smile metropolitenovtsy want to see on the faces of owners of other lost goods. But if within six months the owner is not there, the thing is the decision of the Commission sell or recycle.