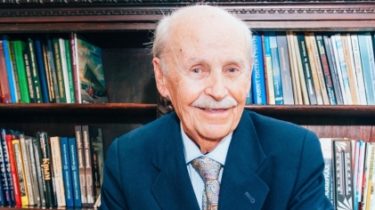 The economist-patriot departed to a better world in 91-m to year of life.

Kiev says goodbye to Bohdan Hawrylyshyn. One of the most famous Ukrainians of today, the economist and philosopher of world renown passed away at the age of 90, according to a story TSN.16:45.

Advisor to global corporations and co-founder of the world economic forum in Davos, Switzerland returned to Ukraine after many years of immigration to help build a new state. Morning from the International management Institute, which was founded Havrylyshyn, on his last journey he accompanied the students. Those who knew him say that he always smiled and inspired other people special positive power. And even at 90 years old had such joy in the eyes and love of life that seemed to never grow old.

As reported, an outstanding Ukrainian Havrylyshyn died 24 Oct. About the tragic news in Facebook announced a charity Foundation prezedentom which he was. “The last minutes of his life Bogdan D. spent with family in his apartment in Kiev”, – stated in the message. The body of a prominent economist’s plan to cremate in Ukraine and then drive to Geneva.

One of the most famous Ukrainians of today, the economist and philosopher of world renown passed away at the age of 90. In the evening you would be able to say goodbye in Greek-Catholic Church at Askold’s grave, but this time the ceremony takes place at the International Institute of management, who founded Havrylyshyn.