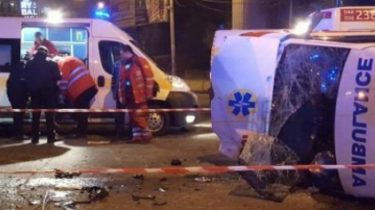 Accidents at the intersection occur regularly.

In an accident involving Renault and the ambulance died and the driver of the car and injured four people. The accident occurred at the intersection of prospect street and the streets of Kirovograd, says the story TSN.19:30.

Witnesses say that at this crossroads of busy traffic and accidents occur at least once, if not several times a month. Clear proof of this is shattered, broken guardrails. Matron pedestrian bridge say that deadly accidents have become accustomed. Machines break regularly, costing the strikers and even in the Elevator. “The doors were changed. Recently in this border flew”, – says Mrs. Natalia.

In Kiev “ambulance” got in an accident

It happened at night. In the accident one person was killed. Four people were injured. The accident occurred at a large intersection of the street and the street Kirovograd. Who is to blame for the accident, investigators still can’t say. Witnesses say the car was moving, when both traffic lights flashed yellow.

In Kiev such a “damned” deadly crossroads, there are at least two dozen. To make them more safe should together the city administration, highways and the police. But in these departments the problem seemed not to notice. “You can put the speed limiter, speed bumps. You can post the traffic lights for the duration of, to was a buffer zone not as it is now – two or three seconds and ten seconds,” suggests the expert Vladislav Antonov.

In the last accident of the perpetrators has not yet been formally named. However, the E. M. T. s believes that not to write off all of the deceased driver of “Reno” would be wrong. “I was driving with flashing lights and a siren on the yellow light. And “Reno” was. Don’t know how he heard. He’s in the yellow started to move and we jumped on the yellow. Well, basically, we are also to blame,” says the medic.