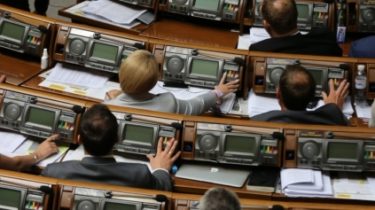 The MPs note that the name of the city does not meet the standards of the Ukrainian language is transliterated from Russian names.

The relevant draft resolution was registered on the website of the Parliament (registration No. 5308).

A draft Decree on bringing the name of the city of Severodonetsk of the Luhansk region in accordance with the rules of Ukrainian orthography proposed by the deputies of the faction of the party “Block of Petro Poroshenko”.

The MPs note that the name of the city does not meet the standards of the Ukrainian language is transliterated from Russian names “Severodonetsk”, which is a significant argument for giving the city faithful a Ukrainian name, which is confirmed by historical facts, recorded in the official spelling journals in Ukraine and says the phonetic and morphological norms of the Ukrainian language.

The paper also reported that it is worth considering that due to Russian military aggression in the fall of 2014 the city of Severodonetsk has become the de facto regional center of Luhansk region is now a Bastion of Ukrainian Lugansk region, therefore can not wear skanirovanie with Russian language name.

We will remind, in Kropyvnyts’ke a street now bears the name of the deceased border guard Oleg Parshutinawho were serving in Donetsk border guard detachment. It is noted that Oleg voluntarily went to the East to protect the Homeland, and in civilian life he worked in Kirovograd bakery. The military was lost during the night of 31 July 2014 as a result of shelling from rocket-propelled grenades by insurgents.