Wives of soldiers often go to the front for a while 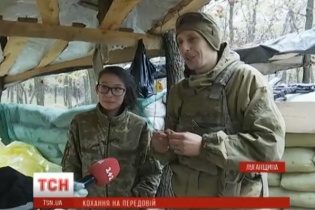 Wives of soldiers often go to the front for a while

Among the Ukrainian soldiers more and more of those who are fighting under the supervision of the wives. Some even sign contracts together and convince while they are next to each other, with them nothing will happen, says the story TSN.16:45.

Military Callsign “Nose” on the front line waiting for his wife Brook have shared the dugout, their family position has the same name as the Callsign of the fighter. Next is a grey area –the village Novoaleksandrovka.

The military says that married life has benefited over several months by 7 kilos recovered.

Soldiers in these positions are very different. For example, a young firefighter with a degree under his gun – guy 23 years old, and the gun 30. The eldest of the men with the call sign “Buck” before the shore, but temporary line of demarcation is not willing to accept.

With favourite and Paradise in the dugout: more and more Ukrainians are fighting under the supervision of wives

Some even sign contracts together, and argue that while they are next to each other with them, nothing will happen. Family equip shelters as their home, and the joint forces are trying to stop the enemy.

Very close to them – Popasnaya. The stele at the entrance to the city is broken, see the tricolor of the self-proclaimed “DNR”, but love it here. Julia married six months before the war.

“The main thing is that I was there with my husband, and he’ll be all right while I’m here,” said the girl.

At home she has two children – Sasha and Marina, husband begged me not to risk it, but she wouldn’t listen. They lived together in barracks and tents, but now have a family nest, protected by decking.

The dugout Julia and Alex equip a home, because waiting for individual housing, as in a peaceful area not everyone is waiting for a two-bedroom apartment. The contract was signed before the end of the special period. Assure that the helmet does not prevent a passionate kiss, and the armor and shops with machine – warm embrace.