A day in the area ATO: militants staged a hell in Avdeevka, artillery nightmare Krasnogorovka and Trinity 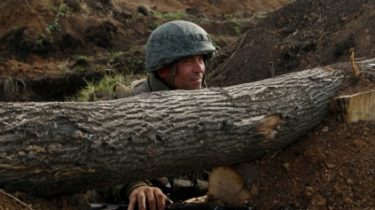 A day in the area ATO: militants staged a hell in Avdeevka, artillery nightmare Krasnogorovka and Trinity

The separatists are 32 times violated the ceasefire.

Saturday, October 29, the Pro-Russian militants groups “DNI” and “LC” 32 times opened fire on Ukrainian military positions along the entire line of differentiation on Donbass. On the Mariupol and Donetsk directions terrorists used artillery, forbidden by the Minsk agreements.

On the Mariupol direction militants have been 17 attacks. Close to Trinity and Krasnogorovka terrorists shelled with mortars 82-mm caliber artillery caliber of 122 mm. At the Lebedinskiy, Talakovka, Shirokino, Hnutove and Water separatists fired from mortars of caliber of 120 mm. In the area of Marinka used small arms and heavy machine guns.

We will remind, for the past day during the fighting in the Donbas killed one Ukrainian military, seven more got wounds.

The OSCE mission confirmed that Russia supplies to the Donbass and military equipment. The facts of crossing the border, military equipment, recorded over a week ago, was announced at a meeting of the Council of the OSCE yesterday. For last days fighters beat on positions of Ukrainian military more than fifty times. Marinka, Krasnogorovka and Shirokino fired from mortars, grenade launchers and BMP.