Juncker confirmed the implementation by Ukraine of all criteria for bezveza 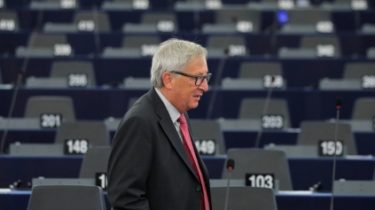 Juncker confirmed the implementation by Ukraine of all criteria for bezveza

Juncker and Poroshenko discussed the agenda of the summit Ukraine-EU.

About it reports a press-service Poroshenko.

“The President of the European Commission once again confirmed the implementation by Ukraine of all criteria for granting a visa-free regime for Ukrainian citizens”, – stated in the message.

The sides discussed the situation around the ratification by the Netherlands of the Association agreement EU – Ukraine. Juncker said that the agreement, including a free trade area, continues to operate.

In addition, the sides discussed the agenda of the next summit Ukraine-EU which will take place in November.

Read also: Poroshenko told the date to which Ukraine will receive a visa-free regime with the EU

We will remind, the President Petro Poroshenko met with President of the European Council Donald Tusk and European Commission President Jean-Claude Juncker. The interlocutors reaffirmed the importance of maintaining sanctions against Russia to restore territorial integrity of Ukraine.

Klimkin explained the reasons for the postponement Bezus for Ukraine. According to the Minister, the approval of a visa-free regime with Ukraine will not be considered by the European Parliament in October due to the debate around immigration crisis.