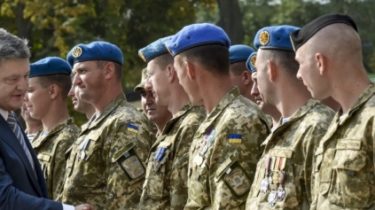 Among the awarded – 26 military has received awards posthumously.

President of Ukraine Petro Poroshenko has signed a decree on awarding 109 military who took part in the fighting in the area Zaytsevy, Avdeevka and on the Mariupol direction.

As noted, among the recipients of 26 soldiers marked posthumously.

Separately noted that the remaining 83 soldiers were wounded in the East of Ukraine and was awarded with medals “to Defender of the Fatherland.”

We will remind, earlier the defense Ministry told that the Ukrainian military has received more than 140 million UAH for participation in the ATO. The families of the dead soldiers APU – ATO members paid 1 billion to 317.5 million hryvnia one-time financial assistance.