Lutsenko called the priorities in the Yanukovych team 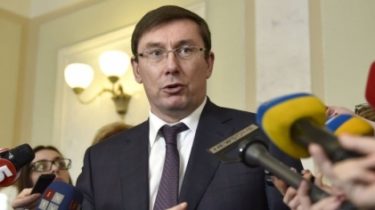 Lutsenko called the priorities in the Yanukovych team

The Prosecutor General’s office of Ukraine is ready before the end of the year to bring to trial a case of high treason Viktor Yanukovych and his move to the enemy. This was stated by the head of GPU, Yury Lutsenko, said in the story TSN.19:30.

The attorney General called the four priority process, which will begin soon in courts. Important – it is the usurpation of power by the ex-President, bring to the impoverishment of the APU and the flight to Russia. Another priority is economic crimes Azarov, Klyuev, Klimenko, Arbuzov and smartly. The Prosecutor’s office in a hurry, because banks keep their archives only five years. Information for 2011 not all provide. A separate case highlighted the privatization of “Ukrtelecom” through offshore. And the fourth episode of the pressure on the religious denomination.

All the cases are combined under the heading “a criminal organisation”. Now the Prosecutor General’s office is preparing a billto condemn the defendants, who fled in absentia. “We have to take things with a high degree of readiness, which are not associated with the tragic events on the Maidan. And prepare them for transfer to court under article 255 – the creation of a criminal organization. Very important step: to formulate a General cap 255 of the articles so that all the cases subsequent years, any case the criminal organization of Yanukovych was reflected in that hat,” – said Lutsenko.

Important – it is the usurpation of power by the ex-President, bringing the Armed forces to the impoverishment and escape to Russia. Priority 2 – economic crimes Azarov, Klyuev, Klimenko, Arbuzov and smartly. The Prosecutor’s office in a hurry, because the banks retain their archives only five years. Information for 2011 not all provide.