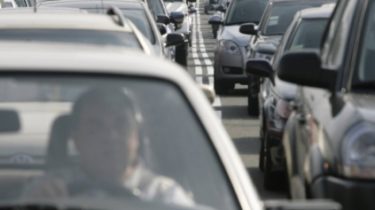 Tester showed multiple excess of norm of alcohol in blood of the driver.

Friday night in Kiev, due to an accident at the water Park were blocked to traffic bridge across the Dnieper. On the exit from the flyover bridge metro the driver of the SUV flew off the road and crashed into a pole, according to a story TSN.19:30.

The blow was so strong that the axle broke and bent 90 degrees. The design was in a Volvo that passed by. This car was crashed in the roof. The accident blocked the road towards the left Bank.

Jeep responsible for the accident landed a few meters upside down. Fortunately, it passed without casualties. The driver of the SUV got off lightly. The police checked him for alcohol and found a rate of 1.6 per Milles at admissible norm 0,2 only.

At the Hydropark happened major accident

On the exit of the metro bridge towards the left Bank the driver of the SUV “Touareg” off the road and crashed into a pole. The force of the blow was so strong that the axle broke and bent ninety degrees. Blocking the road in both directions. The car a few meters flew by and landed on a roof.