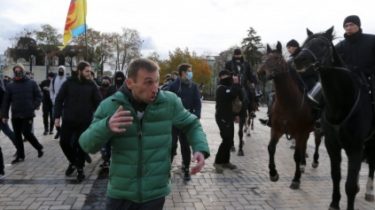 The organizers insist that their initiative is misunderstood.

Activists of the so-called “hemp March” in favor of decriminalizationand not legalization of marijuana. In this focus the organizers of the rally, says the story TSN.19:30.

“It’s a completely different concept. Decriminalization is to remove criminal liability, and legalization is a complete solution for sale. Here we are opposed to all of it was available, such as, for example, cigarettes are sold,” – said the representative of the organizing Committee Oleksandr Chyzhov. At the rally noted that hemp is an ancient crop plants, which received fame nekroticheskogo funds. So now in need of rehabilitation.

In the capital held a “Hemp March”. Organizers say they are against legalization, as many thought, and only proposes to decriminalize. Supporters of this idea gathered a little, and the opponents were several times more. Not without fisticuffs.

Slogans of activists of the March was not liked by the nationalists who had gathered much more. Has been aggressive opponents of soft drugs – they went on the offensive and made a small scuffle. In the event law enforcement officers intervened, several representatives of the party “Svoboda”, was detained. Supporters of decriminalizing marijuana in a special corridor sent from Mikhaylovskaya square to the funicular.

However, the entrance was blocked by young men with covered faces. Ordinary passengers of the funicular was under siege. The solution arrived the police cavalry – militiamen on horseback. Nationalists immediately accused the police of unlawful practices. In the end, the participants of the “hemp March” held on the Hem foot. The campaign ended.