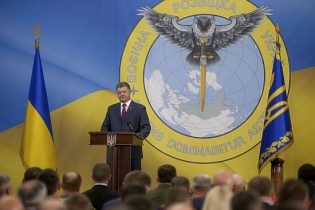 The emblem depicts the owl that permeates sword the territory of Russia.

Russian officials, journalists and ordinary users of social networks one after another began to Express their outrage over the new emblem of military intelligence of Ukraine.

The emblem drawn owl that holds a sword piercing through the territory of Russia. The slogan of Ukrainian scouts written in Latin “Sapiens dominabitur astris” (translated as “the Wise will rule over the stars”).

The odious Deputy Prime Minister Dmitry Rogozin called the logo “moronic”. The official representative of Russian foreign Ministry Maria Zakharova wrote on Facebook that “in Ukraine for all ills added another bird. Apparently, when all departed the eagles, had to take up arms owls”.

Pay attention to the moronic symbolism of the Ukrainian security forces https://t.co/oPN6WEl00A pic.twitter.com/VQxZhFvSIf

The Russians noticed the logo on a photo from the presentation of the new head of the Main intelligence Directorate of the Ministry of defense of Ukraine major General Vasily Burba. In this case, and journalists and officials from Russia attributed the inscription “Ukraine – above all”, which was placed above the emblem, the slogan of the Ukrainian scouts (actually it’s not a slogan). 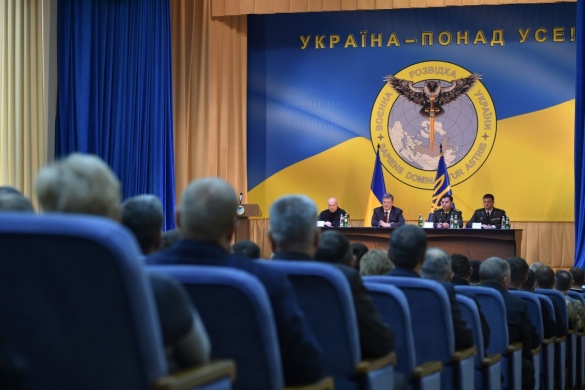 So, Rogozin said that the inscription is a direct translation from German. “Nothing and no one like?” he asked on Twitter, alluding to the German Nazis.

But the inscription above is a direct translation from German. Nothing and no one like? pic.twitter.com/3Pyrjq7Swo

The Russian publication Snob on his page in Facebook wrote: “the New emblem of the intelligence of Ukraine was the owl, piercing with the sword of Russia. And the words: Ukraine uber Alles!”. 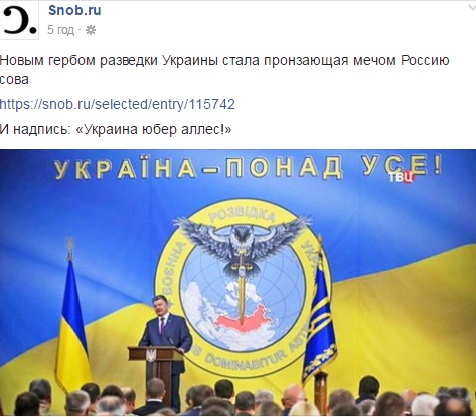 When military intelligence of Ukraine adopted a new logo, we could not find, but on the page it Facebook it appeared seven months ago in March 2016. But the Russians noticed it just now.

People’s Deputy of Ukraine Dmitry Tymchuk pointed out the symbolism of the new logo of the Ukrainian intelligence: the owl is the predator that feeds on bats (the symbol of the Russian intelligence).

“The Russian media saw the emblem of the DIU Ukraine (owl, which “pierces the sword of Russia”). Give the Russians one thing: owl in nature, eating bats (a bat – a symbol of military intelligence of the Russian Federation). Have a nice day!” – wrote Tymchuk.

In turn, Russian political scientist Grigory Trofimchuk urged his compatriots not to laugh at the new logo Gur of the Ministry of defense of Ukraine.

“An owl breaks the sword card of a particular country: Russia. This is a serious innovation in heraldry, which usually is in abstract images and symbols. Moscow sent a clear signal: it will fight until, until both fall to the enemy. And it hardly makes it clear only the Kiev. You are no longer the dill on the Chevron, which is so much fun all began”, – he wrote in Facebook.