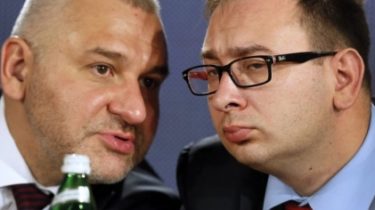 Lawyers are trying to attract journalists to their conflict.

Between the former lawyers of Ukrainian MP Nadiya Savchenko Nikolay Polozova, Marc by vaginam and Ilya Novikov, a scandal erupted.

In the social network Facebook lawyers lashed accusations against each other.

So, Polozov in his post wrote that Novikov participated in activities created by the Russian presidential aide Vladislav Surkov of the organization “Young lawyers of Russia” and at the time defended the Commissioner of the Kremlin movement “Nashi” Sergei Belokoneva.

See also: fagin is convinced that the visit Savchenko in Moscow will harm the Ukrainian political prisoners

“As it turned out, he was involved already in the activities of the organization “Young lawyers of Russia”, created by Surkov and the head of the Kremlin movement “Nashi” Yakemenko. Of opened the days mail Surkov revealed that in this period the head of the “Young lawyers of Russia”, a close friend of Novikov Bruev and a participant in the CPP Semenova Inna from Ukraine (also his colleague) was at the meeting with Surkov (…) Novikov was the lawyer of the former head of Rosmolodezh, the Commissioner of movement “Nashi” Belokoneva. Feigin and I am learning all these details, Novikov suggested to stop these politically incongruous things”, – said in the post Polozova.

Then it turned out that Novikov has debts to Sberbank of Russia, but despite this he quietly went abroad.

“Moreover, the presence of overdue debts does not affect his travels abroad and in other ways. Let me remind you that under the pretext of a fine of 5,000 rubles vagina is not released to the Forum of free Russia in Vilnius just a couple of weeks ago. Although, of course, the reasons are purely political. All the questions addressed to the Novikov on these occasions he either was silent, or carried outright nonsense kind of forgot about the debt and so on,” added the former defender Savchenko.

According to Polozova, Novikov kept a secret from him and Feigin snuck in jail Savchenko to the draft law, later named after her, and allegedly kept secret from his colleagues began to address issues concerning resident then detained in Ukraine, the leader of Dill Gennady Korban. The lawyer also noted that his colleague sister via MP Vira Savchenko, do not deny relations with Viktor Medvedchuk, to solve their problems. Godfather Putin, according to Polozova, was also involved in the visit Savchenko in Moscow.

“Through Faith, sister Savchenko, who did not conceal their close relations with Medvedchuk, said this publicly, Novikov began to solve their problems. And, apparently, decided. There is no doubt that the arrival of Hope in Moscow – the result of the efforts of the same Medvedchuk. Remember, he spoke openly about his sympathies for Novikov and dislike of Feigin and Polozov, both personally and through his press Secretary,” – said Polozov.

See also: “Not to react”. Putin commented on the visit Savchenko in Moscow

However, he added that with his part in the case of Savchenko Novikov coped “badly”.

Later on the prosecution responded himself Novikov. He declared readiness to stay in Kiev to respond to the emerging scandal around the questions and wrote: “Former harmony will be gone. Your countrymen in Russian prisons protect two liars. Or an agent of the FSB. Or three of a liar. If you really cares about your hostages, then let us sort it out”.