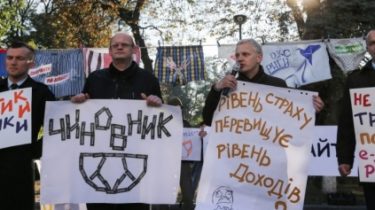 The Declaration showed a huge difference between officials and those they represent.

Anti-corruption reforms in Ukraine envisage the online Declaration of the high-ranking officials of their wealth. The implementation of this requirement showed a huge difference between politicians and those they represent.

This writes Alessandra Prentice in the article “the Ukrainians are shocked by the declared state policy”, published on the website of Reuters.

Some have declared the millions of dollars in cash. Others stated that parks own luxury cars, expensive Swiss watches, jewelry, diamonds and vast tracts of land. These revelations may further undermine public confidence in the authorities in Ukraine, where the average salary is just over $ 200 a month.

See also: Heavyweights e-Declaration. How much cash in pounds store of Ukrainian politics

The officials had time till Sunday to upload information about their assets and income in 2015 in the open database. It was in part supported by the International monetary Fund’s campaign to improve transparency and modernization of the Ukrainian economy affected by the recession.

Prime Minister Volodymyr Groysman, who last week likened the process of declaring a jump out of a plane, indicated that he and his wife a total of a $ 1.2 million and 460 000 euros in cash and a collection of luxury timepieces.

The database also shows that Groysman, a former businessman and a provincial mayor are not alone in the fact that he prefers to keep most of their money outside the banking system of Ukraine.

See also: E-Declaration as a manifestation of culture “humiliated and insulted”

Reuters calculations, based on returns show that 24 members of the Ukrainian government together have available approximately $ 7 million in cash.

In the declarations of the two brothers from the faction of President Petro Poroshenko, Bogdan and Yaroslav Dubravica, we are talking about savings of more than $ 26 million, also in cash.

“When the Ministry of economy said that in some areas about 60 percent of the economy is in shadow, it can be explained by the amount of money registered by public servants, officials and lawmakers,” said Taras Kachka, Deputy Executive Director at the International Renaissance Foundation George Soros.

“It’s a reflection of the state of our society.”

The Minister of justice Pavel Petrenko, who declared $ 1 million in a Bank account and another $ 500 000 in cash said that the decision of the officials to keep the cash points to the mistrust of banks, and many Ukrainians will be able to understand it.

“Of course, it seems that in the EU store cash – a sign of lack of civility” he said. “But this is due to the fact that, say, the banking system could be better. It has become a problem for many Ukrainians who lost their savings in the Bank”.

Declarations deputies and officials interested in National Agency on corruption prevention. There now is a briefing. A correspondent reports TSN live, what will they do at the Agency with a completed declarations and for which reports will be taken in the first place.

The Declaration is intended to demonstrate the goodwill of the officials, that they are willing to open their finances to the public, to answer for their actions and move away from a culture that tacitly allowed the officials to accumulate wealth through nepotism and bribery.

However, the public reaction is rather similar to the shock and anxiety due to extravagant lifestyle, which became known after the publication of the declarations.

Read also: the European Union has responded to the deadline for declarations of Ukrainian officials

“We didn’t expect it to become such a widespread phenomenon among public officials. It is difficult to imagine a European politician who invests in a collection of wines where the cost of one bottle is more than $ 10 000”, – said Vitaly Shabunin, head of non-governmental anti-corruption action Center.

The representative of the Opposition bloc, MP Mykhailo Dobkin indicated in the Declaration of 1780 wine bottles and an antique copy of a Russian novel “Anna Karenina” is worth at least $ 5 500.

Roman Nasirov, head of the State fiscal service, said that the ownership of him and his wife are Swiss watches, jewelry, diamonds, fur coats, fine China and crystal, assault rifle and cash in euros and dollars in the amount of $ 2.2 million.

See also: the head of the faction “BPP” complained of “persecution” of members of their declarations

In their Declaration, Oleg Lyashko, the head of the populist Radical party, who calls himself a representative of ordinary people, reported that leases a house and land in the most exclusive area of Kiev, and his family has cash in the amount equivalent to more than $ 1 million

Other declarations give an idea of specific Hobbies and interests of Ukraine’s elites.

Igor gryniv, head of the faction of Petro Poroshenko, possesses a collection of icons Dating from the 14th century, and several works of Ukrainian artists of the impressionist movement. MP Ihor Mosiychuk wrote in the Declaration a number of antique weapons, including a Turkish scimitar 16th century English broadsword and dagger Nazi SS.

Many policymakers have filed their declarations for the last two days before the deadline, which led to an increase in surprise and anger on social media over the weekend.

“So I personally, as a patient. Or rather, how hard and beaten so sick. I harboured no illusions about our political and bureaucratic elite. But still, it stuck out as something quite beyond”, – wrote in Facebook Roman Donik, a volunteer on the front lines.

The average citizen of Ukraine has greatly suffered because of the economic crisis, which began after Pro-European uprisings “independence” and the subsequent Pro-Russian separatist conflict.

The national currency, the hryvnia fell sharply to 25 against the dollar from 8 in 2013, while electricity rates rose under the program of economic reforms supported by the IMF.

See also: “a gift from the Mikalaichyk,” a ticket to space and Holy relics. Guess who the politicians it owns

Recent discoveries is likely to exacerbate social discontent in relation to the progress of the current leadership in carrying out reforms. A poll in September showed that only 12.6% will now vote for the faction of the Poroshenko, in comparison with 21.8% at the last election. At the same time, support for populist and opposition parties is growing.

The Agency for the fight against corruption has stated that it will now begin the verification of declarations, but with the arrival of more than 100,000 declarations, it is difficult to say how thorough is this process.

Trillion in cash and hundreds of firms: the most interesting declarations of Ukrainian officials

Civil servants and MPs a lot of their savings are kept in cash. Today at midnight was the deadline for submission. One of the last Declaration filed by the President of Ukraine. In addition to a luxury house near Kiev, more than 40 hectares of land in the Metropolitan area and ownership rights in more than 100 companies. The mayor of Kharkiv Gennady Kernes cash has 42 million. But MP Sergei Melnychuk said a trillion cash.