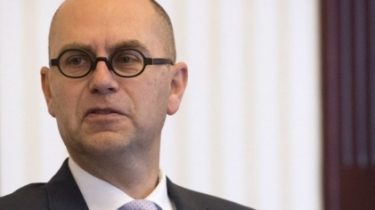 The head of the IMF Mission Ron van Ore© UNIAN

By the end of 2016 Ukraine’s GDP should grow by a half percent.

The IMF mission, which is 3-17 November was a revision in Kiev, released its preliminary report. Representatives of the largest creditor of Ukraine as the government saw the restoration of the economy and predict its growth to 1.5% for FY 2016 and 2.5% in 2017. at the same time between the lines of the report it becomes clear that the next tranche of the IMF loan to Ukraine this year not to see – because not adopted the state budget for 2017, is not carried out certain reforms and a lot of work in the fight against corruption.

“The mission held constructive discussions with the government on matters necessary for the completion of the third review of the programme of economic reforms regarding the arrangements under the EFF (extended lending program). Good progress has been made, but authorities need more time to implement policies to ensure medium-term fiscal sustainability, including the approval of the budget by 2017 in line with the programme targets-maintain financial stability and in the fight against corruption. Discussions on these issues will continue in the future”, – said the head of the IMF Mission Ron van Ore, which quoted the press service of the Fund.

See also: the IMF has noted positive changes in Ukraine after the reforms

The International monetary Fund States the growth of Ukraine’s economy after two years of constant fall.

“Decisive policy action in the last two years has led to a sharp decline in external and domestic imbalances. Inflation was successfully reduced, the international reserves of the Central Bank increased significantly and growth is expected to reach 1.5% in 2016 and approximately up to 2.5% in 2017. the Strength and stability of recovery depends mainly on the implementation of ambitious reforms to support Ukraine’s transition to a full market economy. GDP per capita in Ukraine, as before, is very low – only 20% of the average for the European Union and the second lowest level among all the countries of Central and Eastern Europe,” stated Ron van Ore.

The IMF advised Ukraine to accelerate reforms in state-owned enterprise sector, including through privatization; improving the business environment; to fight corruption to attract investment and to enhance the capacity of the economy; to increase salaries in line with productivity growth to ensure competitiveness; continue fiscal consolidation to ensure an acceptable level of deficit – spend pension and tax reform; to implement prudent monetary policy aimed at further reducing inflation and rebuilding reserves under the flexible exchange rate regime; working to restore the financial system and a revival of Bank lending.

The head of the IMF Mission noted that it is only through active and effective reforms in Ukraine will reach an economic result, and will overtake the neighbouring countries of the EU.

Read also: IMF suspected Ukrainian officials in the concealment of property from the e-Declaration is the head of the NACP

“The government must remain United in their determination to pursue reforms while resisting to the pressure of populists and overcoming resistance from vested interests. Especially decisive steps must be taken to combat corruption, which remains the most frequently mentioned obstacle to doing business in Ukraine. At the same time, progress has been made in the establishment of new institutions, including the National anti-corruption Bureau of Ukraine. Also important is the publication of declarations of assets of officials of high level. This is an important step. However, tangible results in the prosecution and conviction of corrupt officials and recovery of proceeds obtained through corruption, has still not achieved”, – stated in the message of the IMF.

Meanwhile, the NAB announced the initiation of three criminal proceedings on the results of inspections of electronic declarations against two MPs and one judge.