In the area of ATU per day wounded three soldiers 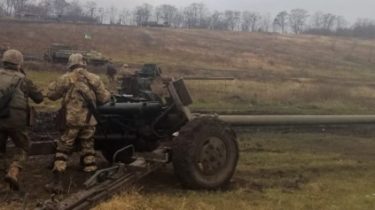 In the area of ATU per day wounded three soldiers

The wounded are in hospitals.

Over the past day in the area ATO no Ukrainian military were killed, but three soldiers were injured.

This was announced by the speaker of the defense Ministry ATO Col., reports Ukrainian Pravda.

“As a result of fighting no Ukrainian soldier was killed and three servicemen were wounded”, – he said.

Now all wounded are in hospitals and receive proper medical care.

Recall the push stroke the previous day, November 19, Russian occupation troops and then hit the positions of Ukrainian soldiers in the East. On the Mariupol direction from mortars, grenade launchers and small arms, the invaders fired on Shyrokine, Krasnogorovka, Talks, Marinka, Water, Pavlopol. Sirocina fire led 152 millimeter artillery shot and the tank