On the Mariupol direction, the ATO are talking about the appearance of Kadyrov 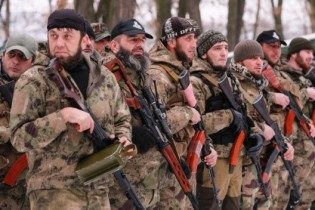 On the Mariupol direction, the ATO are talking about the appearance of Kadyrov

The Marines saw the green flag in Sahanka.

Militant activity in these days on the sea of Azov was the highest since the beginning of the month. Military attribute this to the arrival of another batch of Russian weapons in the Donbass, says the story TSN.19:30.

“They went to the ammunition, they have, than to fight,” say the soldiers. Artillery works both day and night – stops when the OSCE observers. In the darkness, the militants are trying to sabotage. “To a beam of 400 meters. They are trying to climb, sometimes to the village, but the village we pressed them, locked. Nothing turns them,” – said the marine with the call sign “Minsk”.

Artillery, mortars, tank. The soldiers who are now holding the line of defense at the site of Shirokino, Pavlopol say they’ve seen over the positions of the occupants of the green flags. Residents of Donetsk say that in the occupied regional center allegedly arrived Kadyrov mercenaries from the battalion “North”.

On the eve of the social networks of inhabitants of the occupied areas wrote about Kadyrov’s fighters of division “the North”, that supposedly appeared in Donetsk. The Marines say that in the occupied Sakhank saw the green flag. Theoretically, they said it could be a military unit of the Russian Federation to the place of permanent deployment in Chechnya.

Despite the increased power of the enemy Ukrainian Marines doubt the final victory of Ukraine have not. Say, if only more support from the rear, and the oath they would be faithful to the last – for I give it a year or two, but for life.