The new army and the approach of bezveza: Poroshenko summarized the results of three years after the revolution of Dignity 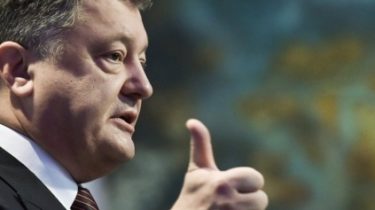 The new army and the approach of bezveza: Poroshenko summarized the results of three years after the revolution of Dignity

Ukraine – on the right track, the President said in his congratulatory message on the occasion of the Day of Dignity and Freedom.

The President of Ukraine Petro Poroshenko congratulated Ukrainians on Day of Dignity and Freedom.

The text of the appeal posted on the official website of the President.

“Three years ago, several hundred brave boys and girls, without the involvement of any politicians who gathered at Euromaidan to Express peaceful protest against the actions of the regime of Yanukovych, who stole their big European dream. Brutal beating of youth “Berkut” has stirred up the whole country… And in November the thirteenth, no one even could not imagine how hard trials in store for us destiny… And what a high price you have to pay for such values as freedom, dignity and independence”, – the statement says.

Poroshenko noted that Ukraine strangled the default, which seemed to be inevitable. And Russia not only started the war, but also made a real trade blockade, than in the aggregate, caused losses in the hundreds of billions. Besides the army and security services practically did not exist.

“That depth was the bottom, where it started to rise,” he said.

“The army is clothed and fed”

Handling Poroshenko said that immediately after the victory of the revolution of Dignity the best and the bravest of the Maidan protesters went straight to the front. And this year the country have been able to afford to give up another wave of mobilization, to let go of the demobilized reserve and sign professional contracts with tens of thousands of volunteers.

“This is eloquent testimony to the progress made in strengthening the defense capability of our state. The army clothed and fed. She is a professional and armed. And let not the latest technology, but enough to deter Russia”, – said Poroshenko.

“Our economic body has been discharged from intensive care”

The President also noted that the economy to avoid default and catastrophe, the government “had no choice but to resort to tough and unpopular measures.”

“Critical for us was, and continues to support the International monetary Fund. But the Foundation never writes sweet drugs. So I understand that we unwittingly hurt millions of families. For it is not a sin and apologize. But I am sure that soon the effectiveness of the measures taken will experience greater and greater number of people”, – said Poroshenko. And assured: “Our economic body has been discharged from intensive care and is showing signs of recovery.”

According to him, after fourteen consecutive quarters of decline, which began a year before the revolution and the war, the economy finally resumed growth. And the revival of business activity and the first steps to legalization, the increase in revenues allowed us to plan a tangible increase in the minimum wage – up to 3200 UAH.

“It’s time to collect the first, albeit not very juicy, but the fruits of hard anti-crisis measures”, – said the President.

Also to the achievements Poroshenko has ranked the creation of the patrol police, anti-corruption Bureau, e-Declaration of incomes of officials, the beginning of the rebuilding of roads, the introduction of anti-corruption electronic system of public tenders ProZZoro and decentralization, which “redistributed money from the centre in favour of community”.

See also: the EU at the legislative level to discuss the way to provide bezveza Ukraine — Klimkin

In addition, the President remembered and visa-free regime with the EU.

“We implemented 144 points of the action Plan on visa liberalization, thus committing a number of extremely important for us reforms. This week , the Council unanimously adopted a resolutionthat recognized the full implementation by Ukraine of all obligations. He declared the clear political will of the Union and all its members to provide us the visa-free regime in the near future, after some purely internal procedures of the European Union”, – said Poroshenko.

“My talks with the leaders of the institutions and the member States of the European Union give cause to predict that there will be a mutually acceptable compromise between Ukraine, EU and the Netherlands, and ratification of the Association Agreement and free trade area will be completed,” he added.

The appeal emphasized that “Euromaidan, Revolution of Dignity and to the memory of the Heavenly hundred irrevocably determined the European vector of Ukraine.”

“We are moving in the right direction and right purpose. And the way to European stars, like any other, runs through the thorns – reg aspera ad astra. Therefore, in the road so hard. Because the errors in the solution of highly complex problems inevitable. Sometimes I ask myself the question: “Could I prevent errors?” Combines the wisdom of many peoples replied: “Not mistaken only one who does nothing”, – said the President.

Separately, Poroshenko said that will not allow internal conflict in the country and, as Russia wants, “the return of Ukraine to the Imperial stall.”