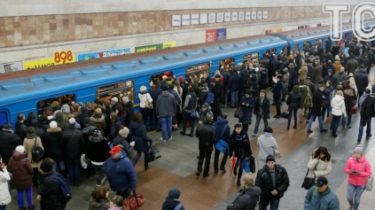 21 November celebrated the third anniversary of the Revolution.

Monday, 21 November, in Kiev will change the timetable of some metro stations and curtail the movement of land passenger transport.

These changes are associated with the planned activities for the third anniversary of the revolution of Dignity, UNIAN reports.

See also: the government decided, when Ukrainians will rest for the holidays

Thus, to avoid the crowds plan to close the entrance and exit of metro station “Khreshchatyk” on Institutskaya street.

With regard to land transport, from six in the morning of 21 November and to the end of the event will be closed to traffic on:

At the same time can limit or block the movement of cars by:

Also changes can make to the work of the public transport routes, a movement which passes the specified streets.

Recall, 21 November celebrated the third anniversary of the revolution of Dignity. So, in Kiev and other settlements of Ukraine will be held memorial, ceremonial, and cultural-artistic events with the participation of representatives from government, public and youth associations, as well as clergy.