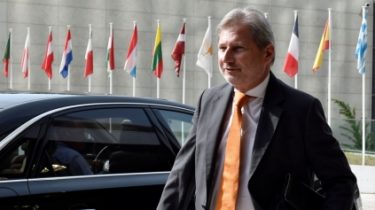 It is important to remember those who gave their lives for freedom and European values, – said Gan.

The EU is on the side of Ukraine in the quest to realize the dreams of those killed during the revolution of dignity.

About this in his Twitter wrote to the European Commissioner for neighbourhood policy and enlargement negotiations, Johannes Hahn.

“It’s important to remember those who gave their lives for freedom and European values. The EU is on the side of Ukraine in the quest to realize their dreams,” wrote Gan in the microblogging service.

Security forces is motivated by the possibility of escalation of the conflict.

Activists claim that the tires they tried to carry on as a character. This was stated by the speaker “Right sector” Alexey Bull.

Part of the tires still managed to carry and set fire to them under a stele.

Today, on the 3rd anniversary of #Maidan, remembering my first visit to #Ukraine, when I paid respect to the heroes of #Maidan 1/2 pic.twitter.com/NUzGz74Ct8

In Lviv, priests of different denominations, organized a prayer Maidan

To honor the heroes began to Lychakiv cemetery, where are buried the four euromagazine: Migdalovitz, Ilkiv, Boyko, Verbitsky. To their graves and laid flowers and held a service. In General, the region was lost on the Maidan is 22 character. At the monument to Shevchenko organized a prayer Maidan, also there will take place the action “Ukraine – Europe”.