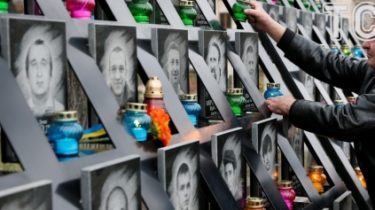 In the center of Kiev recall the tragic events of three years ago.

Today, November 21, Ukraine celebrates Day of Dignity and freedom, and in the Alley of the Heavenly hundred commemorated in the revolution.

As the correspondent of TSN, the morning center is partially blocked. The relatives of the victims arrived on Institutskaya street around 10 am. The metal detectors after the President was removed, but the place continue to patrol and law enforcement dog handlers.

Relatives Heavenly hundreds near the memorial say that the pain of loss has subsided, but those sacrifices were not in vain. That said, the TSN three of those present:

“My husband came to the Maidan after beat students. He did not come to someone to bring to power. Yesterday I was convinced that all was not in vain. Yet we have such a youth, until my eyes burn, albeit slowly, but changes are coming”

“I’ve been told that they no longer want. Remember, get upset. Didn’t do anything. The memorial is made, and the monument no”

“Sorrow, pain – they are not, and will not soon pass. Until the end of his days we remember these Holy places to get around. We will do everything that they are not forgotten”

The third anniversary of the revolution of dignity: a chronology of protest

The beginning of the revolution of dignity I think the evening of 21 November 2013, when after the news about the government’s decision to suspend work on the preparation of the Association agreement with the European Union on Independence square the protesters came out first and spent the night there. On the night of 1 December, the Maidan was brutally dispersed by the Berkut. That’s when the protest turned into a real resistance on the street the next day came a million.

Not without trouble. At the Heavenly hundred’s Alley past the memorial passed a convoy of protesters who carried out the campaign under NBU. They walked in silence, even look did not stop at the memorial, and one woman near the memorial launched a poster, started screaming. Relatives asked her to move away and have respect for the dead, but she didn’t pay attention to them. 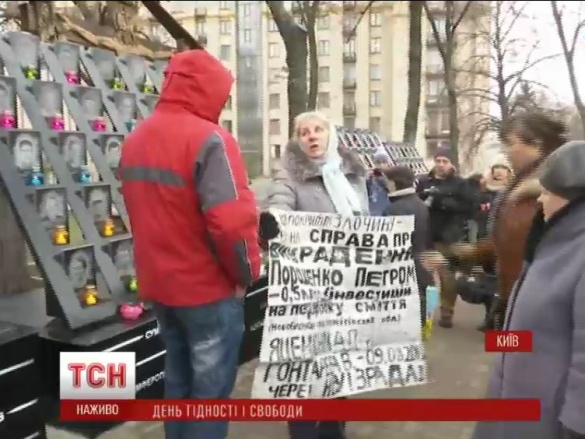 “It is very painful to us, the families of the victims, to see that this place of memory of the Heavenly hundred are used in political intrigues. Paid hundreds of alcoholics and homeless people passed by, and none of them bowed down and not crossed, we’ve only heard the dirty swearing, and it was unpleasant,” says one of the relatives of the victims.

This was stated by Petro Poroshenko during the celebrations for the Day of dignity. The President said that he personally gives the order about allocation of the earth in this place. Despite the fact that the site is controversial, because about him, like, there are court decisions about property. Soon to announce a tender for the construction of the memorial complex.