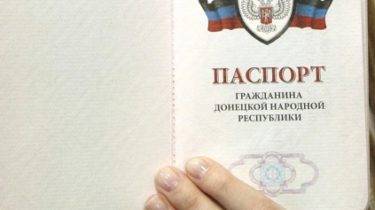 The invaders promise not to take people’s Ukrainian documents.

The authorities of the so-called “DNR” claim about the alleged “dual citizenship” residents of the self-proclaimed “Republic”.

About this on air of one of the channels said “the head of the migration service of the Ministry of internal Affairs of DNR” Vladimir Krasnoshchek, transfers “Island”.

“Provides for dual citizenship. What remains of the Ukrainian passport (after receiving the passport document of the “sample” of “DNR” – Ed.) Nobody’s claiming him. It is the right of every person to do what I want with it”, – he said.

Earlier it was reported that Russian security forces in the Donbass demand that the militants “of the 1 St of AK DNR” and “2nd AK DNR” to provide full details about relativesliving in the unoccupied territory of Ukraine. So, even require copies of passports.