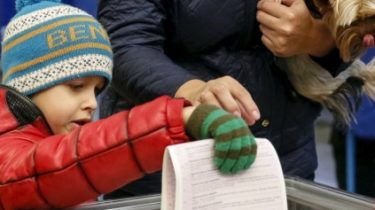 The data of the two services differ.

The current President of Ukraine Petro Poroshenko and the leader of the “Fatherland” Yulia Tymoshenko would have received the highest number of votes in the presidential elections if they were held in November.

This is evidenced by survey data that simultaneously held two Ukrainian sociological service, the Razumkov Centre and KIIS.

According to the poll by the Razumkov Center, for Poroshenko ready to vote now 16.2% of all voters Tymoshenko is 11.5%.

The head of the Opposition bloc Yuriy Boiko would support 9.4 percent, the main radical of the country of Oleh Lyashko – 6%, for the leader of “Samopomich” Andriy Sadovy ready to vote to 5.7%, for the head of the party “Civic stand” Anatoly Gritsenko – by 4.9%.

17.8% of respondents said that would not participate in the elections, and 18.2% would vote for another candidate, 16, 2% are undecided.

A public opinion poll conducted by KIIS, shows slightly different results. According to the service, the maximum number of votes would be received by Yulia Tymoshenko with 21.3%. For Poroshenko would have voted for 18.5%, Vadim Rabinovich – 11,7%, Gritsenko – 10.5%, Boyko and Lyashko – by 9,4%, beyond the Garden of 7.2%.

19.2% of respondents said that they would not participate in elections, 27.4 per cent have not yet decided for whom to vote.

Different and opinion polls about the elections to the Verkhovna Rada.

The Razumkov center conducted the poll from 4 to 9 November 2016. 2018 polled respondents aged from 18 years to 118 settlements in all regions of Ukraine, except Crimea and occupied territories of Donetsk and Lugansk regions. Theoretical sampling error (excluding design effect) does not exceed 2.3% with probability 0.95.