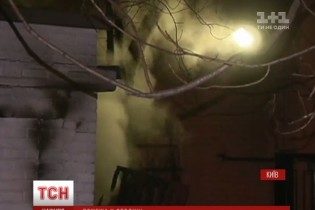 However, the rescuers and services assure that the threat is more theoretical, and they solve the problem without a hassle for residents.

In the city center continues a fire in the tunnel with high-voltage cables under CHP. A powerful electrical system is burning on the street Zhylianska, says the story TSN.19:30.

At the scene, see smoke, feel the heat and spreads the acrid smell of burnt rubber. The cables have a voltage of 10 thousand volts each. Arrived at the scene, 4 cars SSES and about 25 personnel. Fire can’t start to fight the fire because the wires are still served current. Now rescuers are trying to agree on the blackout with the administration of “Kyivenergo”, negotiations continued for almost two hours, but none of the electricians on the scene had not arrived.

As it became known, in the case of emergency power outage without electricity would be almost half of Kiev, so the team first translated the voltage of the reserve line, and then shut off the problem area. Rescuers reassure citizens that those without light will not stay because of an emergency shutdown, most likely, will avoid the threat of the spread of fire. “Only after the staff of “Kyivenergo” will disconnect the power supply and will give written permission for lifeguards , then the lifeguards will start work”, – said the speaker of SSES in Kiev Svetlana Vodolaga.

It is in these moments on the street Zhylianska lit tunnels. Fire can’t start to fight the fire, as the wires still served current. Now rescuers are trying to agree on the blackout with the administration of “Kyivenergo”. Rescuers reassure citizens that those without light will remain until they consider the alternative way of electricity supply.