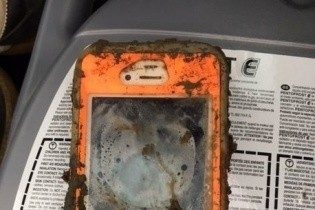 A year ago a man accidentally drowned his gadget while fishing.

Michael Guntrum, a resident of Pennsylvania, thought lost your smartphone forever, when he slipped off of his lap while fishing just in the hole in the frozen lake.

Then in March 2015 the temperature reached minus 25 degrees, reports Buzzfeed.

This year in September a lake, where they fished Guntrum, drained due to a malfunction of its dam. When all the water has disappeared, a mechanical engineer Daniel Kalgren decided to explore the lake with a metal detector.

And not surprisingly, he found a smartphone Guntrum. So the man took him home.

“I brought the phone home, cleaned it and just put it in the rice — just out of curiosity — will it again work”, — said the mechanical engineer.

As it turned out, the rice absorbed all the excess moisture, and two days later, the smartphone has earned.

In the end, the engineer promised to return the phone to the present owner by sending it in the mail.

Recall that in fast food restaurant Burger King in South Korea waitress saved the visitors from the explosion of the smartphone.