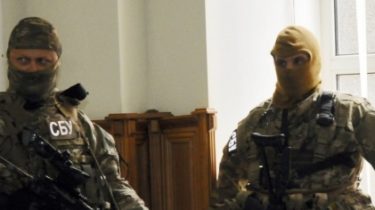 All the data the informant passed the “heads “LNR” on the phone.

The security service of Ukraine detained in Luhansk region an active participant of the informer network of terrorist “LNR”.

“The attacker on the phone passed one of the leaders of “Cossack” bands information about the deployment and movement of Ukrainian units”, — is spoken in the message on the website of the SBU.

During searches of the house of the informant seized notebooks with notes, which confirm the activity of the man in favor of the terrorists.

Detainee has already admitted his guilt and repented.

Open criminal proceedings under part 1 of article 258-3 of the criminal code.

Recall that in late October, the SBU “caught” another informant militants. They found a woman with the call sign “Elena”, a resident of Constantinople in Donetsk region.

SBU detained the informant of insurgents

For the money he reported on the location of Ukrainian soldiers. The data conveyed through social networks. The terrorists promised to pay 20 thousand Russian rubles. According to the official exchange rate is 7 thousand 700 hryvnias.