In Poland detained a man with dogs and a knife, which could attack the dude 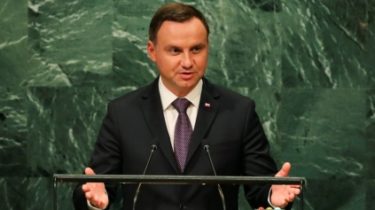 In Poland detained a man with dogs and a knife, which could attack the dude

Continues the clarification of the circumstances of the incident.

In the city Pcari Slonsk in the Silesian Voivodeship the staff of the Bureau of government protection detained the man who could pose a threat to the President of Poland Andrzej Duda.

About it reported a press-the Secretary of Bureau Natalia Markwitz, – informs the Polish radio.

40-year-old man was detained at the entrance to the Basilica, after which it was handed over to the police. Note that the President of Duda makes a visit to the city Pcari Slonsk, where he holds a meeting with local residents. In the program of stay of the head of state was also the visit to the Basilica.

Police found the man a syringe and a knife. Continues the clarification of the circumstances of the incident.

We will remind that earlier in the car of people’s Deputy Vladimir parasiuk threw the grenade. An explosive device was thrown when he was in the car. The grenade flew to the car about 5 meters. The MP believes that the attempt on his life. The police opened criminal proceedings.