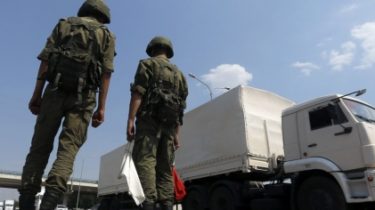 The Russians sent a greater number of cars than was stated in the note of the foreign Ministry.

At the Donbass arrived the 58-second “humanitarian convoy” from Russia.

“Overall, with a 5.55 to 7.10 through Russian checkpoints “Donetsk” and “Matveev Kurgan” on entry into Ukraine proceeded two columns of the so-called “humanitarian” convoy consisting of 47 cars,” – said in the message.

The Ministry of emergency situations said that the cars “humanitarian convoy” brought more than 400 tons of food, medicines and basic necessities”.

Currently, the trucks have arrived at the discharge points in the Donetsk and Lugansk regions.

“Since the Russian side once again made the importation of “humanitarian aid” in violation of international and national law and the agreed modalities, and given the fact that the ICRC had not taken in the design of the participation of the Ukrainian interagency group has conducted only a visual observation without performing control functions”, – said the Ukrainian border guards.

Separately, the Ministry said that the number of trucks did not meet the stated in the previous note to the foreign Ministry of the Russian Federation, because in the document it was about 40 cars.

Note, “gumkonvoi” action is usually greeted with intense shelling. And their number, according to the headquarters ATO, in recent days has doubled. More and more powerful fighters hit the outskirts of Mariupol, where they used mortars and grenade launchers. Also under fire Avdeevka, zaytsevo and Luhansk. In Luhansk militants firing on Novozvanivka, Novooleksandrivka and Crimean.

In the Donbass went to another Russian gumanoy

This four dozen trucks that the militants meet usually intensive attacks. And their number, according to the headquarters ATO, in recent days has doubled. More and more powerful fighters hit the outskirts of Mariupol. Also under fire Avdeevka, zaytsevo and Luhansk. In Luhansk militants firing on Novozvanivka, Novooleksandrivka and Crimean.

Recall that Russia sends “humanitarian convoys” in the combat zone in the Donbass since August of 2014. Customs and border guard services of Ukraine are not allowed to inspect these trucks. According to the Ukrainian side, along with boxes of food Russia is supplying weapons, ammunition and anti-tank grenades. The Ukrainian foreign Ministry repeatedly demanded from Russia to stop violating Ukraine’s sovereignty under the pretext of delivery of the so-called “humanitarian aid”.