The militants are actively stamped cigarettes “Smoke” and “Spring” 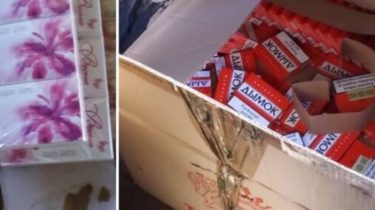 The militants are actively stamped cigarettes “Smoke” and “Spring”

Supply of contraband detained in Turecka.

In Turecka detained party of more than 50 thousand packs of cigarettes, “made” fighters “DNR”.

Wrote about this on his Facebook the chief of the Department of the National police in the Donetsk region Vyacheslav Abroskin.

“Toreck. Authorized search of a local resident, 1966 year of birth, previously convicted. Searched for drugs and weapons and found more than 50 thousand packs of “imported” cigarettes with the “country”-manufacturer – quasisecurity “DNR”, – he said.

According to Abroskin, the cost of withdrawn “tobacco products” is 75 thousand hryvnia.

He noted that he also seized was a large sum of money you could receive from sale of the goods.

“How came this “product” on the territory controlled by Ukraine, will have to install the investigation. Also materials will be sent for further investigation to the fiscal authorities,” – said the chief of police in the Donetsk region.

We will remind, earlier in Donetsk region “covered” network of casinos, which could be funded “L/DNR”. Casino network exposed in the area of the ATO.