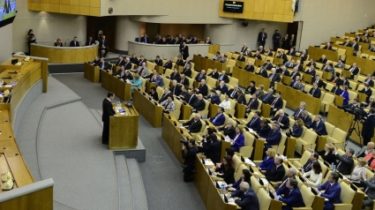 Informed particular criticism of the group was exposed to Ukrainian proposals on de-communization.

The speaker of “the Duma” of the Russian Federation of the seventh convocation Vyacheslav Volodin refused to re-form the working group for legal analysis of legislative procedures and legal acts adopted in Ukraine.

The working group was established by the speaker of the lower house Sergei Naryshkin in March 2014. She was engaged in preparation of expert reports, which are then sent to the Venice Commission, to convey to them information “about the legitimacy of the decisions of the Verkhovna Rada of Ukraine”.

The last time the working group met during the summer.

Particular criticism of the group was exposed to Ukrainian proposals on de-communization.

Recall, the Verkhovna Rada of Ukraine adopted the resolution on the appeal to the parliaments of foreign States, parliamentary assemblies and international organizations regarding the elections in the “state Duma” of the Russian Federation on the territory of temporarily occupied Autonomous Republic of Crimea.

Elections to the state Duma took place on 18 September. The results of the elections in the “state Duma” has got the same four parties that were previously. Pro-presidential party “United Russia” scored 37.7 percent , followed by “Communist” Gennady Zyuganov – of 13.93 and “LDPR” Vladimir Zhirinovsky – 13,11, overcomes the 5% threshold “Fair Russia” Sergei Mironov – of 6.55%.

On 20 September, during a meeting of the Verkhovna Rada MPs supported the resolution on non-recognition of the legitimacy of the elections in the “state Duma,” Russia.