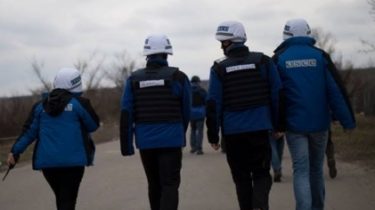 The situation continues to deteriorate in the Eastern part of Ukraine.

According to Special monitoring mission of the OSCEin recent weeks in the East of Ukraine was the largest number of cases of ceasefire violations during the observations.

This was stated by the US representative to the organization Daniel Baier, speaking at the OSCE Permanent Council, writes “UKRINFORM”.

“The situation continues to deteriorate in the Eastern part of Ukraine. So, in mid-November of violation of ceasefire regime reached its highest level since the establishment of the Special monitoring mission in 2014,” he said.

The OSCE last week registered the biggest in the history of the number of violations with the use of heavy weapons, including rocket launchers. While Bayer said that the primary responsibility for these violations continue to carry a Russian-separatist forces. In this regard, he called on the parties to fully implement the Minsk agreement and to provide the mission with full access to all areas of Donbass, especially those that are under the control of insurgents.

Also, American diplomat drew attention to the increase in cases of intimidation, international observers from the separatists. Only in the last two months have been nine, and in all cases they remained unpunished.

Read also: OSCE Observers left the area of cultivation of the parties in the Donbass military

Recall that the U.S. Ambassador to the Organization for security and cooperation in Europe (OSCE) Daniel Baer said that the offensive United , rosasco-terrorist forces in Mariupol and its surroundings.

“We remain deeply concerned about the buildup of the joint Russian-separatist forces outside of Mariupol”, – said Bear.

Read also: OSCE Observers left the area of cultivation of the parties in the Donbass military

It will take place on 7 December. This was reported by the OSCE special representative Martin Zaydik. He also noted that he hoped the breeding forces in the Village of Lugansk in the near future. The Ukrainian side said it is ready to perform their part of the agreement on November 26, but only under the condition that the militants will respect the silence.