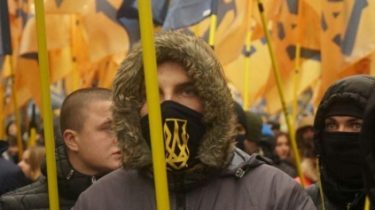 The detainee allegedly was preparing a “terrorist attack” in Makeyevka.

Militants groups “DNI” said about the detention of the fighter the shelf “Azov”allegedly plotting “terrorist attack” in the occupied Makiivka.

This was stated by one of leaders “DNR” Edward Basurin, RIA Novosti reported.

According to him, the detainee’s name is Vladimir Tchaikovsky, he is allegedly a commander of the reconnaissance battalion of the regiment “Azov”. He was taken prisoner on 23 November at a checkpoint near Mayorsk.

According to Basurin, the detainee admitted that “he received the task from command to commit a terrorist act in the market of Makeyevka”.

On the official pages of the regiment “Azov” in the Network has not commented on this information.

Recall that the militants “LNR” declared that detained the representatives of the “radical neo-Nazi group that is the secret office of the battalion “Azov” – a group of fans of FC Zarya “Ultras Black and White”. The terrorists claim that the detainees were distributing neo-Nazi literature and leaflets” calling for the overthrow of the constitutional order “of the Republic.”

Regiment “Azov” declares the innocence of the detained militants “LC” to your organization. Also in “Azov” stated that, according to the dates of birth of detainees that are released by the militants, the terrorists “… “heroically” arrested adolescents”.