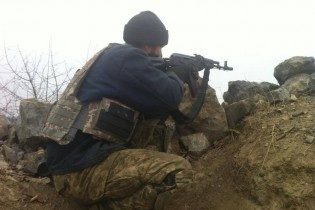 In the Donbas – the game again muscles. “And in Nikolaev, and Odessa, and Kiev will come with the home,” boldly threatens the leader of the militants Zaharchenko. However, right under the noses bouncer from Donetsk, the Ukrainian troops created a potential “pot” in which militants may lose the whole city Dokuchaevsk. Recently, soldiers of the 30th brigade destroyed two artillery systems and is probably the newest Russian radar station.

“Not to let go under fire and not lose a sense of humor,” the two main rules of movement in positions under Dokuchaevsk. He’s not unlike any other city in the Donetsk steppe. It is surrounded by giant piles, like a wall of mountain ranges. When the militants tried to seize them, with great surprise found that the top man-made mountains are occupied by the ATO. The city on three sides, is under fire control of the 30-th brigade. To complete the environment – a half-step.

“With a strong desire to have such an opportunity”, – said the officer of the 30th brigade “the Rock”.

It would seem that only the order – and the militants in the pot, and two hours to Dokuchaevsk Ukraine.

Dokuchaevsk at a glance – Ukrainian troops take position on the heaps around the city, so the front line passes him the Crescent. The only hill that are under enemy control, here called Mordor.

Ukrainian soldiers on heaps well know what kind of mood prevails at the bottom. There is, of course, not yet ready to raise the blue and yellow flag, but the number of dissatisfied “novorosskoy Republic” is coming to critical mass.

“For the Minsk agreements – this is our territory, our city. Why is it not free, I do not understand. The mood of the people – to Dokuchaevsk was released soon and became Ukraine”, – the Chairman of Volnovakha district Council Valery Lubinets.

But the return of Dokuchayevsk is not easy. Losing popularity, the invaders continually reinforce units in Dokuchaevsk. Often you can see soldiers bearing the insignia of the Russian Federation. From the Russian officers and ordered to stop the shelling of Ukrainian settlements.

“The direction they have always been on Novotroitsk”, – the detainee told the gunman, Artem Khrapach.

In Novotroitsk, this, Ukrainian, side the famous heaps live wife and child arrested militants Artem. He admitted, counterintelligence, that side of his friend Denis until recently, it was brought upon peaceful homes 120-millimeter mortars. However, their attacks were warned in advance.

Read also: In Donetsk city was on the verge of a humanitarian catastrophe – the headquarters of ATO

“Constantly called me and said, “Call your wife today may be the fire”. There is no future in the “new Russia”. Sooner or later there will be Ukraine”, – said the detained fighter Artem Khrapach.

Ukrainian soldiers on the commanding heights are convinced that this will happen peacefully and it does not have to close the “pot” around Dokuchaevsk.

Today, 27 November, militants still attacked in the area of Ukrainians. The battle ended in the evening, information about the losses of the parties is not yet known. But the OSCE officially recognizes the increase in the number of attacks in a combat zone.