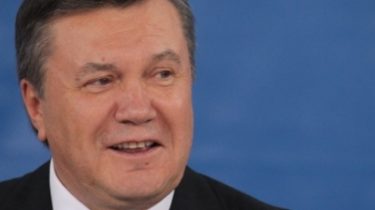 A politician actually answered the question about the Russian aggression in Eastern Ukraine.

Deprived of the title of President of Ukraine Viktor Yanukovych dodged a direct answer to the question of Russian participation in the war in the Donbass.

About it I there was a speech during his press conference in Russia.

Instead, he began to tell about mercenaries who spoke a foreign language, allegedly seen near Melitopol, and then began to quote Kissinger.

We will add, earlier stripped of the title of President of Ukraine Viktor Yanukovych stated that not funding the Donbass.

He stressed that he had no funds in foreign banks, and funds in Ukraine blocked, so it does not Finance movement in the Donbass.

However, Yanukovych thanked those who Finance ORDO in the East of Ukraine.

conference of Victor Yanukovych began half an hour late and just ended (ongoing). On it the President of the fugitive dodged the question whether he plans to return to Ukraine. Quoting Engels, Yanukovych called “Berkut” suspected in the shooting of people on Maidan, innocent. He promised another press conference – 28 November, once all will be to testify in court and refused to reveal what to talk about.