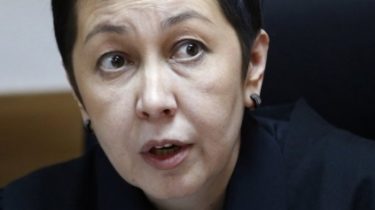 They argue that found in the servant of Themis undeclared car for illegal rooms and luxurious mansion.

The head of Holosiivskyi district court of Kyiv – Elena Pervushina – lives with his family in a small house with an area of 470 square meters in the village of Protsiv near Kiev, which belongs to her ex-husband.

“The Declaration for 2014 are also not listed no movable or immovable property of the judge. However, filling in an electronic Declaration, Elena still remembered about housing, but about a large house with an area of 470 square meters in the village of Protsiv, near Kiev, which belongs to her ex-husband. Only according to official data of the registry, price of the house exceeds 1, 5 million UAH, today’s residential property area in this place you can buy at least 5 million UAH”, – activists note.

According to neighbors, the family lives in this house only in the summer and on the weekends.

“From this the question arises – where does Elena another time, after all, no other real estate Elena Pervushina does not declare. Note that this house is not given in previous declarations of the President of the court, although, according to the new Declaration, and its rights had occurred to her in 2010, and the Declaration of the previous years also included the need to specify rights of use of housing,” – said the activists.

In addition, the Declaration does not specify the husband of Pervushino only daughter. However, she lives in her husband’s house, said the investigation.

Activists argue that once they became interested in the judge’s car, they in turn became interested in the SBU and the military Prosecutor’s office. So, they received information about the alleged Madam Pervushina enjoys undeclared Toyota Land Cruiser 200 with state number: AA 8558 SV. However, the court they noticed a car like this, but with other public rooms – AA 9770 NS. According to activists, none of these license plates are not assigned to the Toyota Land Cruiser.

They stated that on November 24 at 7 a.m. the house of one of the activists “visited” by representatives of the military Prosecutor’s office and the SBU with a search warrant. The judgment was listed Skoda, which allegedly behind Pervushino “watched”, and then “chased”. However, it does not apply to the activist, who made a search, and Automaidan in General, emphasized in Prosud.

Prosud previously published investigations, which found that the Deputy Chairman of appellate court of Poltava region Sergey Galyonkin has the largest declared among the judges of the field house area is 661 square meters and it was built in the form of the Church.