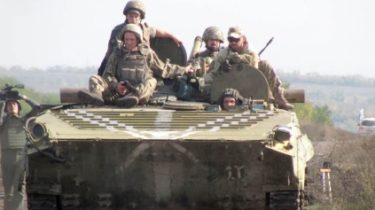 Russian-terrorist troops 12 times carried out attacks in the communities.

Over the past day in the area ATO five Ukrainian soldiers were wounded from enemy fire.

It is noted that within the last day Russian-terrorist troops 12 times carried out attacks in the direction of settlements along the demarcation line.

“In particular, from 82-mm mortars, rocket-propelled grenades of various types, anti-tank missiles, heavy machine guns and small arms sighting and seven times opened fire on the fortifications of our defenders near the villages of Novozvanovka and novooleksandrivka Popasnjansky district”, – stated in the message.

Thus, as a result of enemy shelling, two soldiers were injured.

It is also reported that the militants five times precisely used grenade launchers of various types and small arms in the direction of the villages Lobachev and Crimean the Novoaydarsky area.

“As a result, injured three of our defenders and damaged pipeline. Now the repair crew restored the supply of gas to consumers”, – added in yeah.

According to Klimenko, in the direction of Ukrainian military positions near the village Stanitsa Lugansk terrorists twice used grenade launchers of various types and small arms.

“Injuries to five of our guys is an illustration of the treacherous action of the enemy and its inability to implement the Minsk agreements”, – commented Deputy Chairman of the regional state administration Yury Klimenko.

We will remind that for last days in the occupied Donbas militants of 37 times fired at positions of the Ukrainian military.

After attack on 18 November this year, the Ukrainian side officially stated that they are ready on November 26 to carry out the dilution of forces and means, however, is already the evening of 24 November the positions of the Ukrainian armed forces in the area was fired again. The shelling on 27 November, once again delaying the dilution of forces and means, the report says ATO headquarters.