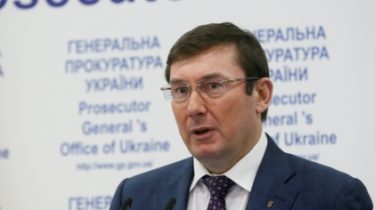 The public Prosecutor read out the suspicion in the Svyatoshinsky court.

Today, 28 November, in the premises of Sviatoshynsky court on direct communication with the Rostov court, which is now Viktor Yanukovych, Prosecutor General Yury Lutsenko declared suspected of treason ex-President.

As reported, Lutsenko, another way to declare a suspicion did not, as Yanukovych is abroad and is not on the challenges of the Prosecutor’s office. Suspicion also gave the lawyers of the former President, located in the svyatoshynskyi court, and sent to “all known addresses in Russia.”

Note that before the beginning of the speech of the public Prosecutor in the court was adjourned for the removal of technical problems with the Skype connection.

“Using the right, I appeal to the Yanukovych Victor Fedorovich. As the General Prosecutor of Ukraine Lutsenko Yuriy Vitaliyovych, I appeal to Yanukovych in accordance with the requirements of article 111, 278 and Chapter 11 of the code of criminal procedure, 28 Nov 2016 reporting that you have Yanukovych Viktor Fedorovych, are suspected of treason, of aiding the authorities of the Russian Federation in deliberate acts committed with the aim of changing the boundaries of the territory and the state border of Ukraine in violation of the order established by the Constitution of Ukraine and waging aggressive war-the crimes under part 1. article 111, part 5 article 27, part 3, article 110, part 5 article 27, part 2 of article 437 of the criminal code of Ukraine.

Given the fact that Viktor Yanukovych is outside Ukraine, not coming to the calls, in fact, hiding from law-enforcement bodies of Ukraine, the content of the suspicion shall be notified orally, and it the message on suspicion today, an hour ago, sent to all known residential address and the last stay of Yanukovych, and also after the end of my statement will be presented to the lawyer of the latter.

The message of suspicion composed by me, as an attorney, in criminal proceedings No. 42016000000001594 to be investigated by the chief military Prosecutor’s office. According to the message content, Yanukovych Viktor Yanukovych is suspected that on March 1, 2014, as a citizen of Ukraine, while in an undisclosed location in Russia, acting intentionally in violation of the articles 1, 2, 65, 68, 132, 133, 134 the Constitution, committed treason. And also with the aim of promoting Russia and its representatives in violation of the sovereignty and territorial integrity of Ukraine, hoping to obtain support and protection from the authorities of the Russian Federation for further long-term residence on the territory of the country and avoid criminal liability in Ukraine, gave a presentation on the legitimacy of the actions of the authorities and officials of the armed forces, giving the appearance of legitimacy, and occupation by units of the armed forces of the territory of the Crimea Peninsula, recognizing explicitly the wrongfulness of his actions, drew up, signed and filed a written statement to the Russian President Putin to use the armed forces of the state on the territory of our country. Than provided to a foreign state, the Russian Federation, and representatives of assistance in conducting subversive activities against Ukraine, but also contributed to the authorities and officials of the armed forces in waging aggressive war against Ukraine and the Commission of deliberate actions with the aim of changing the borders of the territories and the state border of Ukraine in violation of the order established by the Constitution of Ukraine. Which led to serious consequences in the form of violation of the sovereignty and territorial integrity of Ukraine, namely the occupation of the Crimea Peninsula, and caused damages to the state of Ukraine as a result of loss of state property totaling more than 1 trillion 80 billion UAH”.

After the announcement of suspicion Lutsenko appealed to Yanukovych, “as a citizen, not official”. See the treatment of Lutsenko by ex-President:

How wrote on his page in Facebook Advisor to the Minister of internal Affairs Anton Gerashchenko, the Russian channels have disconnected the stream from court as soon as I heard the commencement speech Lutsenko.

We will note, today, November 28, during a meeting in the case of the Euromaidan needs to interview via video conferencing deprived the title of President of Ukraine Viktor Yanukovych.

We will remind, on Friday, November 25 , held a hearing on the case of execution of participants of Euromaidan, the witness of which is held by Viktor Yanukovych. However, about 30 activists with flags “Right sector” and the “Free people” blocked the departure of the accused Berkut officers from prison. They held in hand posters with inscriptions “the Killers of hundreds of Heaven in jail”, “Blood of the Heavenly hundred on your hands” and “Killer jail.”