Sniper fire on Shirokino and ripped off the “silent mode” in the Village of Lugansk. A day in the area ATO 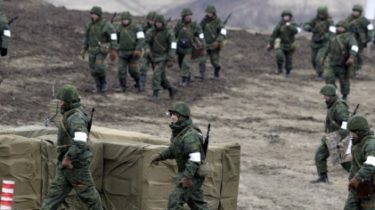 Sniper fire on Shirokino and ripped off the “silent mode” in the Village of Lugansk. A day in the area ATO

In the area of breeding troops in the Luhansk region was fired from grenade launchers.

For the past day in the occupied Donbas militants of 37 times fired at positions of the Ukrainian military.

Read also: Ukrainian troops have created a potential “pot” in which militants may lose the whole city

So, on the Mariupol direction of the 122-millimeter artillery, mortars of various calibers, grenade launchers and small arms they shelling Talakovka, Novotroitsk, Shirokino, steppe, Marinka, Pavlopol and Hnutove. Near the last, and also Novotroitsk and Shirokino fired by a sniper.

In the direction of Donetsk Avdeyevka and Lugansk fired rocket-propelled grenades and heavy machine guns.

On Lugansk the direction from mortars, grenade launchers and other weapons, the militants fired Yellow, Crimean, Novoaleksandrovka and Novozvanovka.

In the area of breeding troops in Stanitsa-Lugansk was fired from grenade launchers.

Next attacks near the village of Lugansk in the evening on 27 November was recorded by the observers of the Ukrainian side of the Joint center for control and coordination of questions of ceasefire and stabilization of the demarcation line.

The positions of the Armed Forces of Ukraine were used small arms and rocket-propelled grenades, said the headquarters of ATO.

“In recent years, breeding efforts and resources on the site have received broad public and political attention, was the subject of discussions at meetings in Minsk and Berlin. Despite the willingness of the Ukrainian side to complete the Framework of the Trilateral contact group, the dilution of forces and means in the area of Stanytsia Luhanska is not happening because of the constant attacks (after the signing of the Framework decision on 21 September 2016 has already recorded 59),” according to the Ukrainian military.

After attack on 18 November this year, the Ukrainian side officially stated that they are ready on November 26 to carry out the dilution of forces and means, however, is already the evening of 24 November the positions of the Ukrainian armed forces in the area was fired again. The shelling on 27 November, once again delaying the dilution of forces and means, the report says ATO headquarters.

We will remind, on Sunday, November 27, drunk fighters fired at a house in the occupied village of Shanka near Mariupol. In social networks reported about two wounded civilians in the “entertainment” of terrorists.